DISCLAIMER: All the blog posts and comments in this blog are personal views and opinions of the authors and do not necessarily reflect the official policy or position of Vedanta Society of Providence.

Anyone can post and comment on this blog. Please send your posts (500 words or less) to vedanta.providence@gmail.com. For more details about our guidelines for posting and commenting, please visit: www.vedantaprov.org/blog_rules/

Dr. Janes continued his work right up until his untimely death in September of 1901. His passing occurred at Greenacres after teaching a class on Comparative Religion. It was reported that his last words were: “It’s a beautiful world.”  The meaning of this was debated by his colleagues, but one can be assured that the Swamis would have known exactly what he meant. He was laid to rest in Swan Point Cemetery in Providence Rhode Island under a simple, humble gravestone. 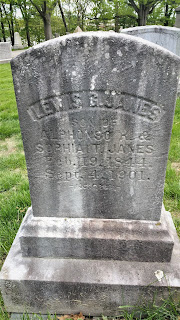 Upon his death there were several services held in his honor at the societies he was involved with. At each service there were numerous eulogies and tributes given and letters read which were put into a book entitled: “Lewis G. Janes – Philosopher – Patriot – Lover of Man.”  These were delivered by people of many different spiritual persuasions and backgrounds and are a clear testimony to how highly he was held in esteem by all. This book is available online and is well worth reading. It allows one not only to learn more about Dr. Janes but to also appreciate his colleagues who were pioneers with him in the early days of "Interfaith Dialogue."

In closing I would like to quote Swami Abhedananda’s words of tribute:

“The sad news of the untimely departure of our most loyal friend, Dr. Lewis Janes, has come to us as like a shock of thunder.  Most irreparable is the loss which his friends of the far East have suffered in his sudden disappearance in the prime of his manhood.  Dr. Janes was friendly to all, irrespective of their faith or creed or nationality or religious convictions.  Being himself an earnest seeker after Truth he admired all sincere souls searching after the Highest Reality of the universe.  He was a soul adorned with those noble qualities that make one just, honest, and self-sacrificing.   Dr. Janes was an indefatigable worker for the good of humanity, and he sacrificed his health in his ardent efforts to help mankind. He was ever ready to learn, from all, such truths as were unknown to him, and to share with them in return the treasures of wisdom that he stored with great care in the secret chamber of his well-experienced soul.  Coming in contact with the spiritual teachers from India he realized that the West has a great deal to learn from the East, and he never lost an opportunity to bring the East and West together, thus endeavoring to establish a harmony between two civilizations that are based on diametrically opposite principles.  He was an able speaker.  He carried with him the courage of his convictions wherever he went, and succeeded in commanding the respect of his hearers and friends.  He was a true lover of Peace and Justice, and was always surrounded by a peaceful atmosphere.  That such a gentle, noble and peace-loving soul may rest in the eternal abode of Peace for ever and ever is the constant prayer of his friend, Swami Abhedananda, of India.”

And finally, because it gives us another glimpse into Dr. Janes and his colleagues, the Pavamana Mantra was chanted with a “Piano-Original Setting” by John P. Fox at the end of the Cambridge Conference service.

Posted by Vedanta Society of Providence at 5:48 PM