DISCLAIMER: All the blog posts and comments in this blog are personal views and opinions of the authors and do not necessarily reflect the official policy or position of Vedanta Society of Providence.

Anyone can post and comment on this blog. Please send your posts (500 words or less) to vedanta.providence@gmail.com. For more details about our guidelines for posting and commenting, please visit: www.vedantaprov.org/blog_rules/

In the early years of Swami Vivekananda’s time in America there were a number of individuals who stood out in their support of his Mission. Some of them are well known to us, while others appear more in the background and are perhaps less appreciated. One of these individuals was Dr. Lewis G. Janes. His name comes up occasionally in books and letters in relation to Swamiji, but who was he and what role did he play in the establishment of the message: “Truth is One, Sages call it by various names”? 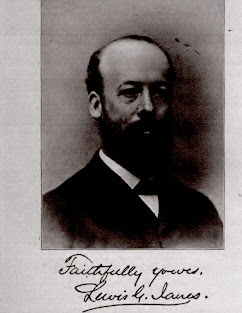 Dr. Janes was born in Providence RI in 1844 to a family with deep roots in New England who espoused the values of freedom and equality for all. They were adherents to Emerson’s Transcendentalism, the Abolitionist movement to end slavery, and the Universalist Church with its main principle of the “Inherent Worth and Dignity of every person.” He was educated in Providence and matriculated at Brown University. He was unable to complete his degree due to illness but was a self-taught scholar who in 1895 received an Honorary Master’s Degree from Brown for his intellectual achievements. Prior to this he had been the President of the Brooklyn Ethical Cultural Society and belonged to the Free Religious Association where he was “devoted to the spirit of free inquiry.”

Dr. Janes’s primary area of scholarly interest was the Theory of Evolution, with a primary focus on understanding Religion and Ethics from this perspective. In other words, is there in the history of Religion an ongoing, demonstrable progression from more primitive (e.g., Fetishism, Animism, etc.) to more advanced (e.g., Pantheism, Theism, etc.) forms of belief and practice?  Belief and practice, most importantly include and specifically relate to the development of moral principles and ethical behaviors. Dr. Janes was not talking about one Religion or another but of the universal search by all mankind, albeit in different ways, to unravel the mystery of life and death.  His hypothesis appears to be that if you can demonstrate that there has been progress or advancement in Religion, then there must be a universal purpose and a goal--the determination of which appears to have been his life’s endeavor.

Given his interest in how other religions understood the above concept, he became a regional organizer for the Parliament of Religions with the specific responsibility for organizing and directing the section addressing the topic of Evolution and Religion.

It is not known if Dr. Janes ever attended one of Swamiji’s talks at the Parliament, but most assuredly he would have heard of his powerful and uplifting message of “tolerance and universal acceptance” of all religions. What is known is that Dr. Janes from this point forward expanded upon his interest and involvement in what is known as ‘The Comparative Study of Religions.’ Like F. Max Muller, he understood that to truly know what the role and purpose of Religion is, one has to compare them across time, culture, and language. Shortly before his death in 1901, he wrote that he believed “in a Science of Religion based on the comparative study of early and contemporaneous forms of religious belief …. The possibility and opportunity for which have only recently dawned on the human mind. Its full revelations are for the generations yet to be.”

So, what is the ‘Science of Religion’?  And how is it conducted?  In the broadest sense, science is the systematic and rigorous study of a subject. Dr. Janes expands upon this in a most Vedantic manner: “There are two essential qualifications . . . an open mind, free from the bias of preconceptions, searching for the ideal truth, and ready to accept truth wherever it may be found; a sound judgment – the capacity for weighing evidence and giving to every fact its due force in the formation of conclusions.”

Posted by Vedanta Society of Providence at 6:38 PM